[OBIEE 11g] Patching Repositories And Migration From Development To Production

OBIEE 11G Patching Repositories and Migration from Development to Production

It supports a concept called as repository patching.What this allows us is to do apply incremental changes to the repository in development directly to production through an automated process. This is based on the concept of Merge that was there in 10g. 11g basically extends this concept. This blog entry basically expands on what Mark has already explained before. There are 2 parts to patching. They are

2. Applying the Patch – This is done by applying the incremental XML file on the production repository.

Initially after any new BI EE install, the repository that is created in development will be tested and then will be moved over to production with changes to the connection pool settings (primarily passwords) done through BI EE Administrator. Unfortunately, this step mandates the use of a Windows machine for Linux deployments. This is still the same in 11g as well. This is highlighted in the sample flow diagram given below

Once a production RPD is deployed for the first time, end users might want more changes to be done in the repository. For example, some of the common changes that might be needed are


These changes will typically be done on the development RPD. The concept of patching basically extracts the incremental changes that were done to the development RPD and then apply them to the production RPD. This is depicted as shown below

Lets try to understand this through an example. Given below is a screenshot of a sample repository that will be moved to production.

Lets name the above repository as DevRPD. Now during the first time migration to production lets assume the following changes are made.

1. All connection pool user names changed to point to the Prod database usernames

2. All connection pool passwords changed to point to the Prod database passwords

Lets name this repository as ProdRPD. After this repository has been migrated to production, let’s assume that we are getting more enhancement requests. Following are the changes requested

2. Rename some columns. For example, rename CHANNEL_CLASS column to something more user friendly like “Channel Class” in the SH subject area. 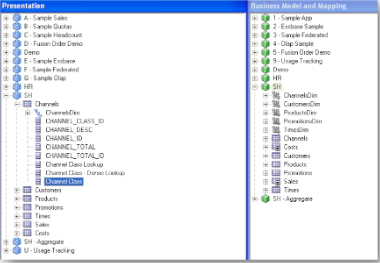 To migrate the changes done in DevRPDv2 repository, we first start with opening up the DevRPDv2 using the Admin Tool. Then we click on File->Compare option and then choose the Dev Baseline Repository as shown below 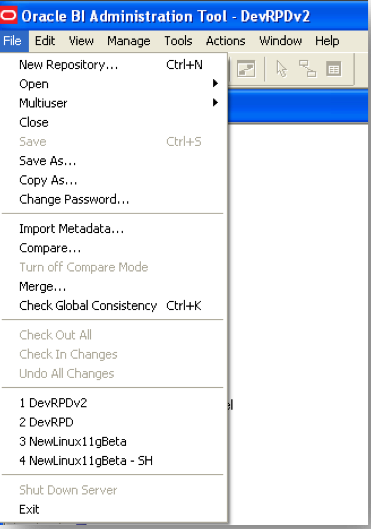 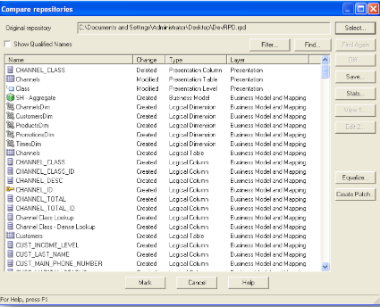 As you see we now have the changes done to the baseline repository (within the DevRPDv2) listed. If you notice carefully, we will have the AMOUNT_SOLD column listed twice as Deleted & Created.

This happens because when we delete an object, the upgrade id associated with the object is lost. The entire process of merge happens through the upgrade ids and not the names. Now you can imagine what will happen when we try to merge a lot of changes. We cannot have control on what developers do and hence we might see even more of these in the actual scenario. To reduce this and to treat the columns with matching names as the same, we have to equalize the repositories. So before every merge, it is always recommended to do an equalization that will ensure that the matching names have the same ids. 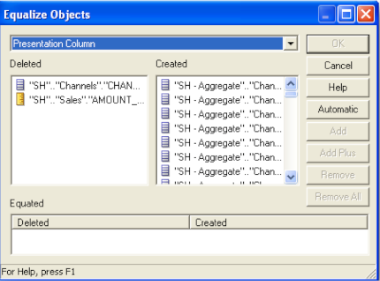 We can equalize non-matching objects (different names) as well one by one. In this case, I will use the automatic equalization that will apply the matching name-matching id principle. This would show all the objects that have been equalized as shown below, in our case just the AMOUNT_SOLD 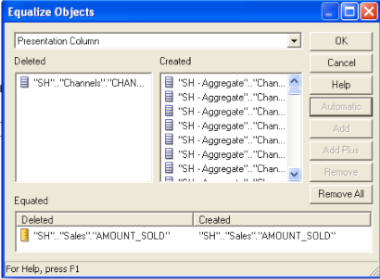 If you now look at the compare screen, you will notice that the AMOUNT_SOLD column will no more be there

So lets create a patch now without making any more changes by clicking on “Create Patch”.


This will create an XML file containing all the changes.

To do this we start with opening up the ProdRPD in offline mode. Then click on Merge & choose the Patch Merging option. Choose the DevRPD as the Original Repository and the XML file generated above as the patch file. Enter the appropriate usernames and passwords.

By clicking next, we trigger the patching process. The patching process basically recreates the intermediary DevRPDv2 internally and then performs a 3-way merge. If we look at the repository now, you should see all the changes in the target repository ProdRPD – Patched.

The same patching can be done through command line utility patchrpd. To do the same process that we did through the Admin tool above, the command would be

One main difference between the command line utility and the Admin tool based patching is, if there is any conflict resolution, the patch utility will just display some warnings and come out without creating the RPD. But in the admin tool we have the opportunity to resolve the conflicts and then proceed with the patching.

No Results' View in Obiee11g

In BI 10g, we are having separate view called 'No Results' to display the custom Message if the specified criteria or conditions is not meeting.


For Example I am taking simple Product, Product Type, Revenue from sample sales. I am displaying only top 10 products in my report and filter 'Product' is having all the types. So If we are selecting any product which is not in the report, It will give empty layout. Instead of Empty layout we can replace with view with some custom message using 'No Results' View.

After that Click Filter from product Column properties and select some products for sample and save it in any name. 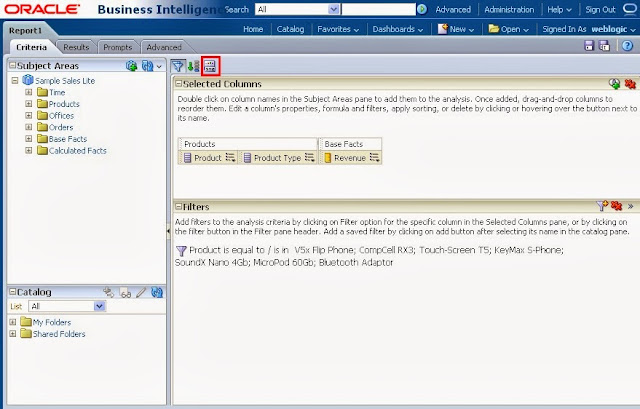 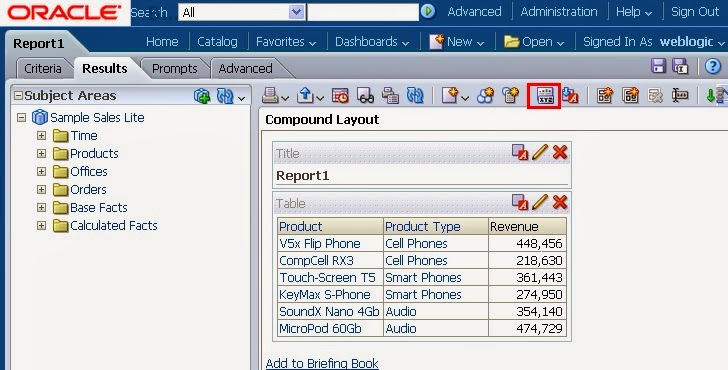 Once we clicked on 'Edit Analysis Properties', we will get Analysis Properties window. In this window in 'Result Display' tab select 'Display Custom Message' instead of Display Default Message in No Results settings and write your own comment in 'Message' Space which we need to display in the report and Click 'OK' and save the report. 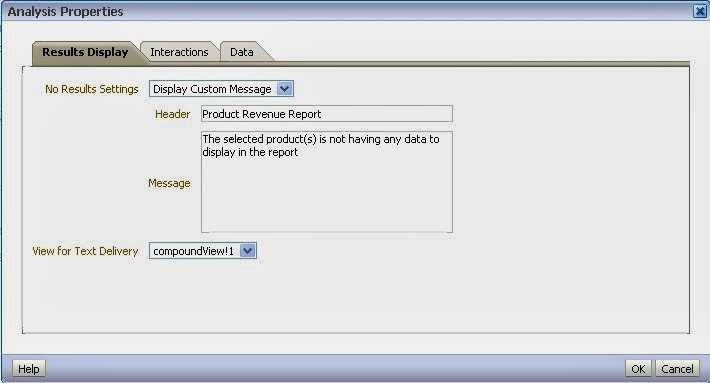 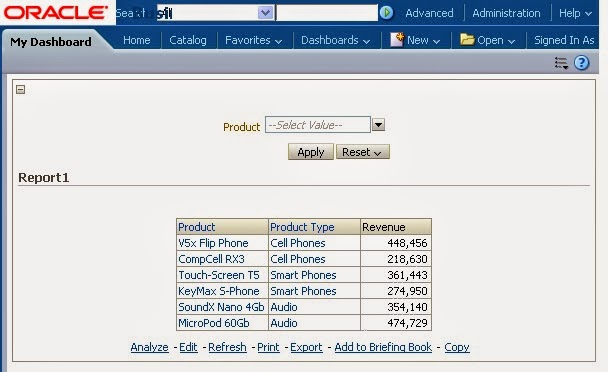 Now select any Product from filter which is not in the report and click 'Apply' in the prompt. It will display the 'No Results' view with the same message what we have created.

OBIEE Server Administration can be done in a quick and simple way using the “opmnctl”  command line utility. This is mainly for developers and not for administrators.

Steps to make a rpd change and load it to BI Server for testing:

         If the “opmnctl status” shows as stopped then just issue “opmnctl startall” and this will start all the BI Services.